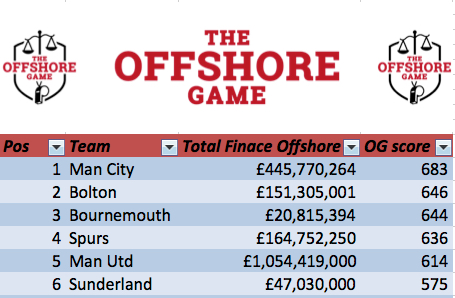 A version of this post originally appeared on the tax justice website www.taxjustice.net and gives some background as to why we have embarked on this project.

This week sees the launch of The Offshore Game, a project dedicated to looking at the role of offshore financial centres in sport. TJN has written about this here and here already. Now for a bit more of an overview of this emerging project.

Our first report looks at the amount of finance from offshore holding companies in the UK professional football leagues.

Over the next few months we will do more reports and stories looking at particular aspects of offshore and sport.

TJN has for years been concerned about how offshore distorts market competition, and sport provides a particularly interesting example.

Sports are about rules — lots of them — and for good reason. David Cay Johnson, a U.S. tax writer who has for years followed the ways in which corporates exploit regulation and ‘deregulation,’ points this out, noting in passing that the rulebook for baseball is so detailed that it prescibes how many stitches the ball must have.

Baseball is no aberration. Football pitches must be a specific size; golf clubs, racquets and bats must be made to certain specifications; and in basketball, jerseys must be tucked in at all times – and so on.

Some free market fundamentalists may see all these rules unreasonable fetters on naked competition. But rules focus the efforts of teams and players on competing where it matters. How ‘competitive’ is a cycle race where half the riders are doping?

Rules in sport are required to drive competition on the pitch. However, there is far less consensus on the rules needed to regulate the business of sport — even though there is a clear link between the money in sport and performance.

Interestingly there is a clear difference between US and European Sports in this area. US sports regulators such as the U.S. National Football League (NFL) place much tighter restrictions on how clubs are financed than European Football associations do. The NFL can prescribe the form of ownership and whether the owners invest with debt or equity. They also limit how much debt they can take out.

Already, critics are huffing and puffing about our report: how dare regulators stop anonymous companies from burying important social institutions in debt!  But really: how interesting is sport going to be if the competition is between the accountants and tax advisors, rather than between the players?

What next? bean counting as an Olympic sport?

Competition can be distorted by the business of sport in a number of ways. Take, for example, the case of Tottenham Hotspur. Tottenham are owned by ENIC international in the Bahamas, and their owner Joe Lewis is a tax exile who made billions betting against the pound.

Tottenham currently wants a new stadium. They say this is needed to compete with the top clubs in Europe. With a bigger stadium, they get bigger revenues, and they can buy and keep better players.

Yet at the same time (and somewhat counter-intuitively) they say that building the new stadium is not financially viable. So they have asked the government to drop certain payments they would need to make towards infrastructure when they build. The council has agreed, and dropped £16m worth of payments, and also waived normal requirements for such projects to include affordable housing.

Is this really a fair way for taxpayers to be intervening in competition in this way – when the owner of the club, who will be profiting from these effective subsidies, has chosen to base himself outside the UK for tax purposes? And how will other clubs perceive this?

England has one of the leading football leagues in the world but the performance of their national team can only be described as poor. Even Greece has done better in major international competition over the last 20 years.

Part of the reason for this is the dominance of players from abroad in the English football league. Here Britain’s supposedly ‘competitive’ non-domicile tax rules play a role.

And here, we have moved into terrain where we are not talking about competition between clubs in any field, sporting or not, but about so-called ‘competition’ between countries and regions, which is a very different beast.

In England if you are ‘domiciled’ abroad (which broadly means you have some sort of emotional connection to another country) you do not need to pay tax on your foreign earnings. For today’s sports stars, their earnings off the pitch from sponsorship and marketing activities can be just as important as the pay they get from their clubs which can accrue to offshore holding companies to be cashed in on their return home. These tax advantages given to foreign-domiciled players incentivises them to come to the UK, more than would otherwise be the case, and this leaves home-grown talent on the bench. Hence, in part, World Cup sporting debacles and other problems.

Dicing with exotic tax haven structures can be dangerous and even end in disaster. Just ask fans of Rangers Football Club. Rangers, years ago, set up a number of trusts for the benefit of their employees in Jersey. These trusts would “loan” money to players, apparently avoiding the need to pay income tax.

Again, this is a clear way to try and attract better players with more pay though tax savings. No doubt their tax advisor (who went on to be come a porn star) told them that this was all perfectly legal and followed the rules. But HMRC, the UK tax authorities, didn’t agree and said the loans should have been counted as income. They slapped Rangers with a huge bill for unpaid back taxes. To cut a very long and complicated story short, this bill was a major contributory factor in the club being wound up and liquidated, ending over 100 years of history of one of the world’s most famous clubs.

“Experience is accumulating that remoteness between ownership and operation is an evil in the relations between men, likely or certain in the long run to set up strains and enmities which will bring to nought the financial calculation.”

It’s hard to think of something more likely to promote ‘remoteness between ownership and operation’ than opaque tax haven ownership structures. To the extent that tax avoidance is driving what is going on, this is going to have further long-term effects, as David Quentin put it recently:

“Tax avoidance in companies is like refined sugar in the human body – empty financial calories with adverse long-term health effects.”

These are just a few examples of tales from the offshore game. Over the next few months we hope to look at more. But as we set out on this journey, it seems reasonable to suppose that having some serious rules about how sports teams should manage their finances can only be good for fans, the game, and indeed for competition itself.